The Stanford Chaparral was founded in 1899 and is Stanford's humor magazine. The founding idea of the magazine from the website of the Chaparral, "Stanford student Bristow Adams came up with the idea of humor in 1899 as a way to make money selling advertisements to typewriter manufacturers." The Chaparral is the third oldest collegiate humor magazine behind the Harvard Lampoon (1876) and the Princeton Tiger (1882). It predates the Columbia Jester (1901) by several years and was founded the same year at the University of Pennsylvania's humor magazine The Punch Bowl.

Born in Washington, D. C., in 1875 Adams attended public schools there and studied at Washington's Corcoran School of Art. After graduating from Stanford he worked for the U.S. Forest Service and was the editor of various magazines. He was a professor at Cornell University from 1914 to 1945, teaching journalism, painting and drawing. The magazine's motto is "'Tis Better to Have Lived and Laughed Then Never to Have Lived at All."

The Chaparral takes its name from a low bush common to the Western United States.There are many types of chaparral and they grow commonly in California. A chaparral is a type of dry habitat consisting of short shrubs.They are woody and thrive in semi-arid environments. 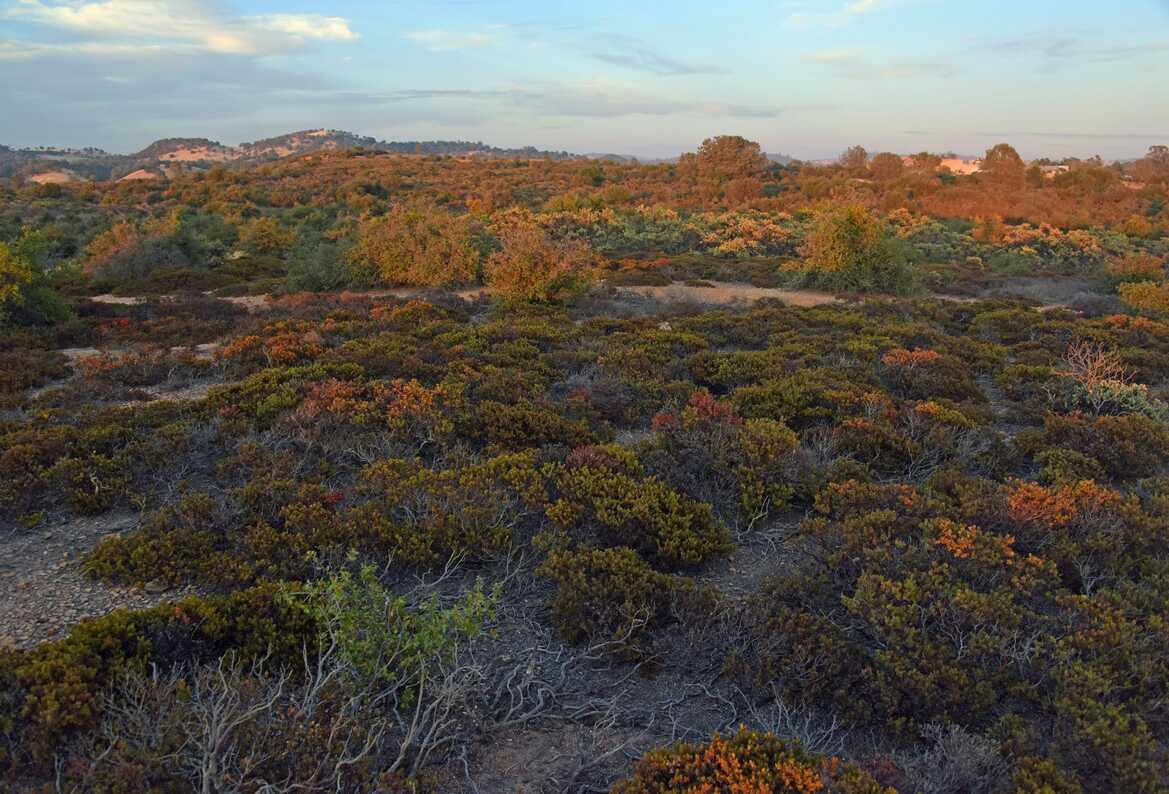 The namesake plant of the magazine, the chaparral

Each magazine is chocked full of articles, illustrations, pictures and period advertisements. The magazine's mascot is The Old Boy, seen below on the cover of a 1913 issue. He is a sledgehammer wielding jester wearing a red suit and hat. 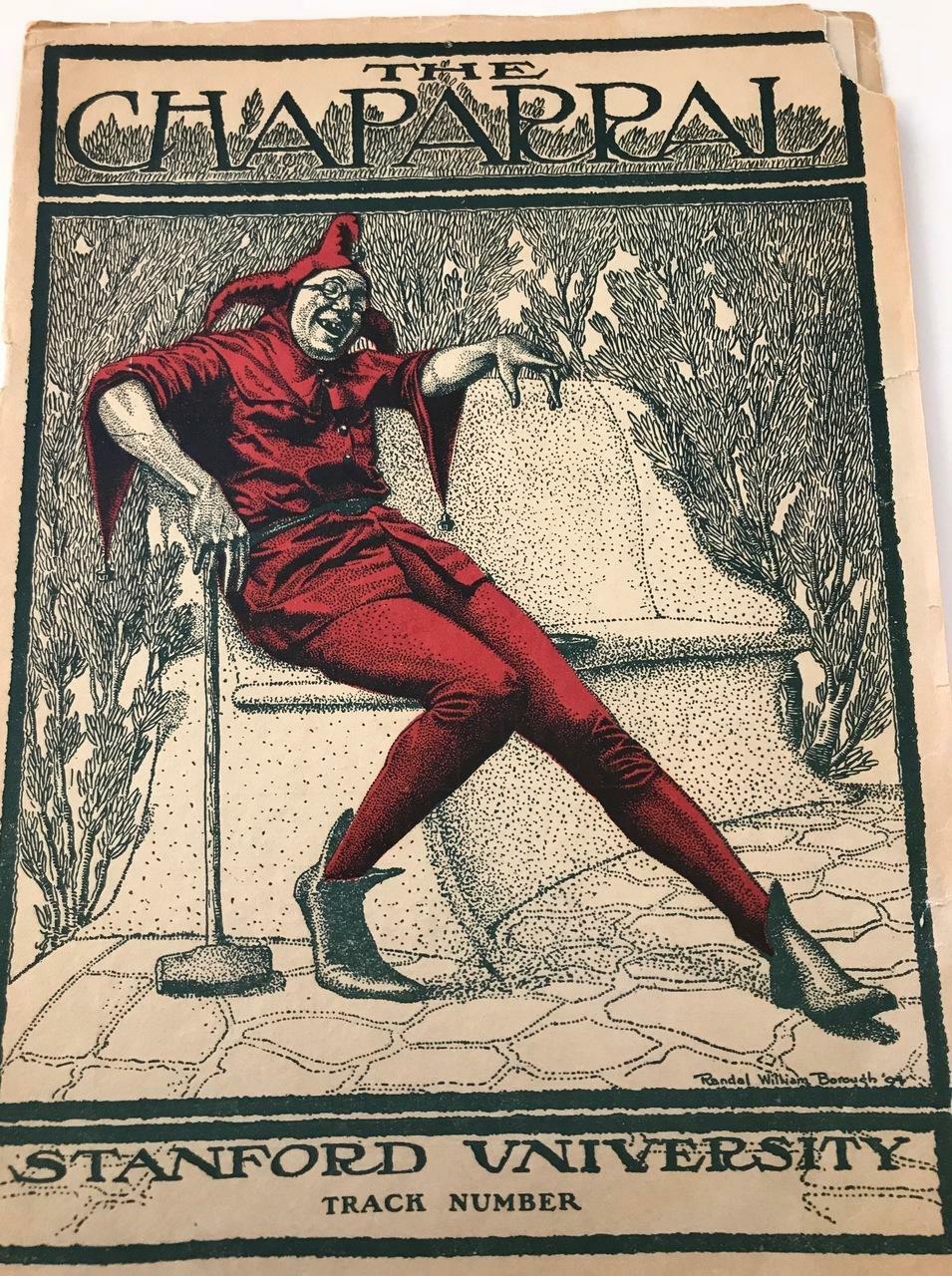 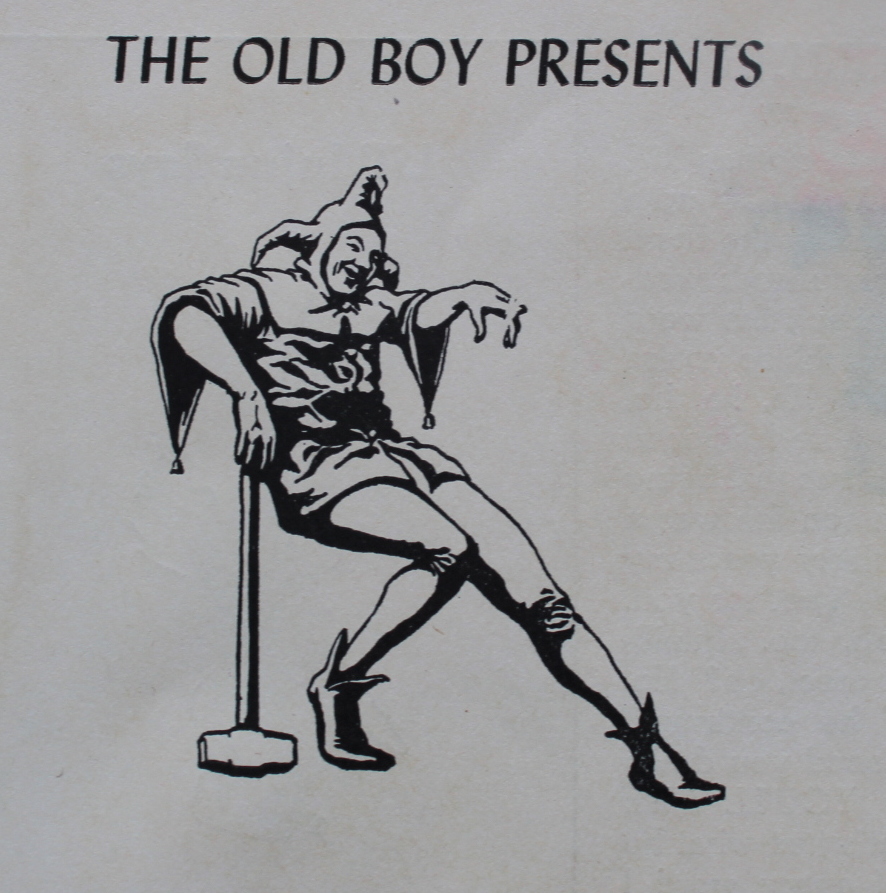 The illustrations and humor in the magazine were in keeping with the times and obviously wouldn't pass muster today. The image below is from a 1917 Chaparral. 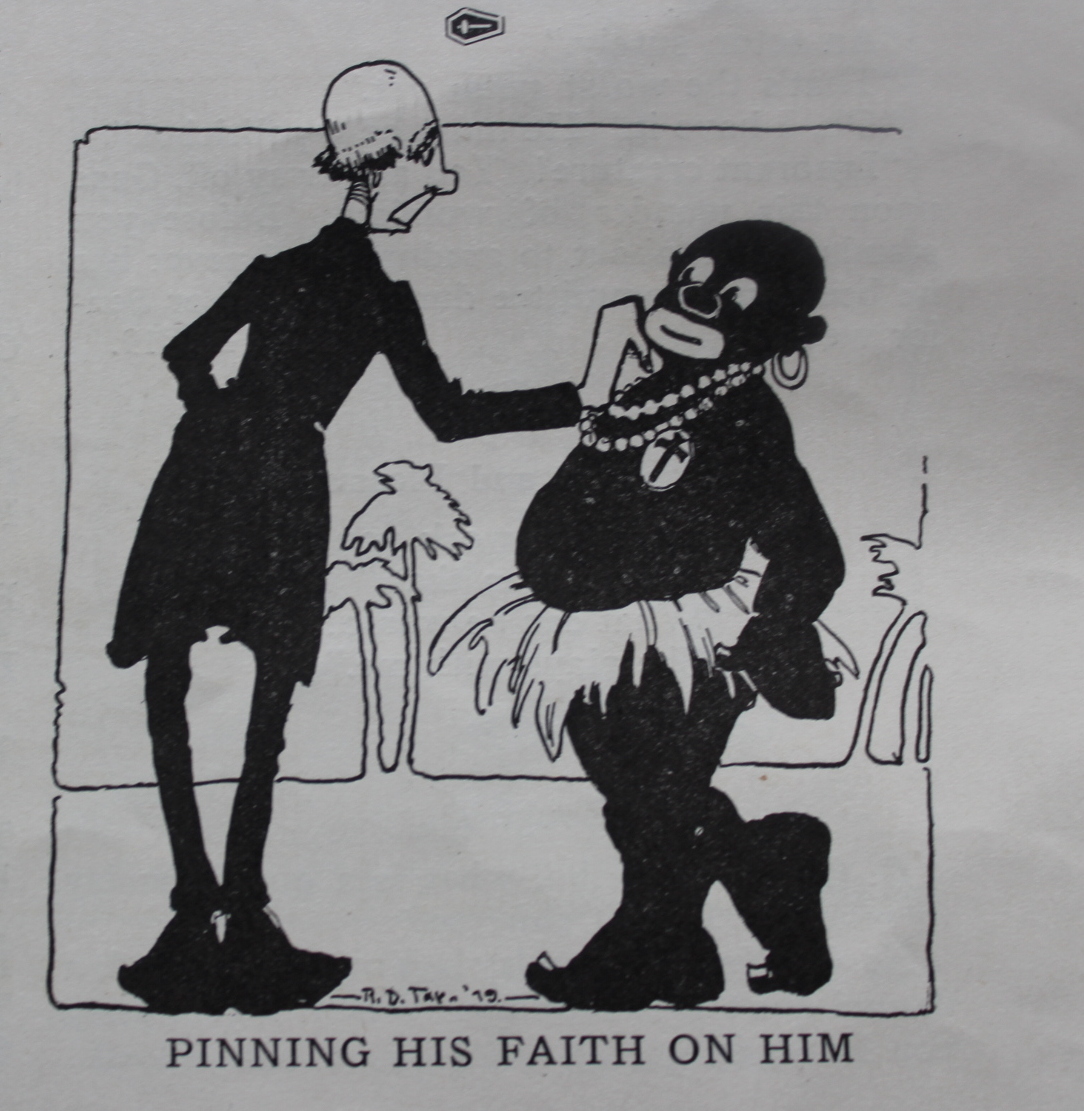 As a magazine produced by college boys it should be no surprise that full figured women featured prominently in the magazine, particularly in the late 1940s and 1950s, as seen on several cover illustrations below. 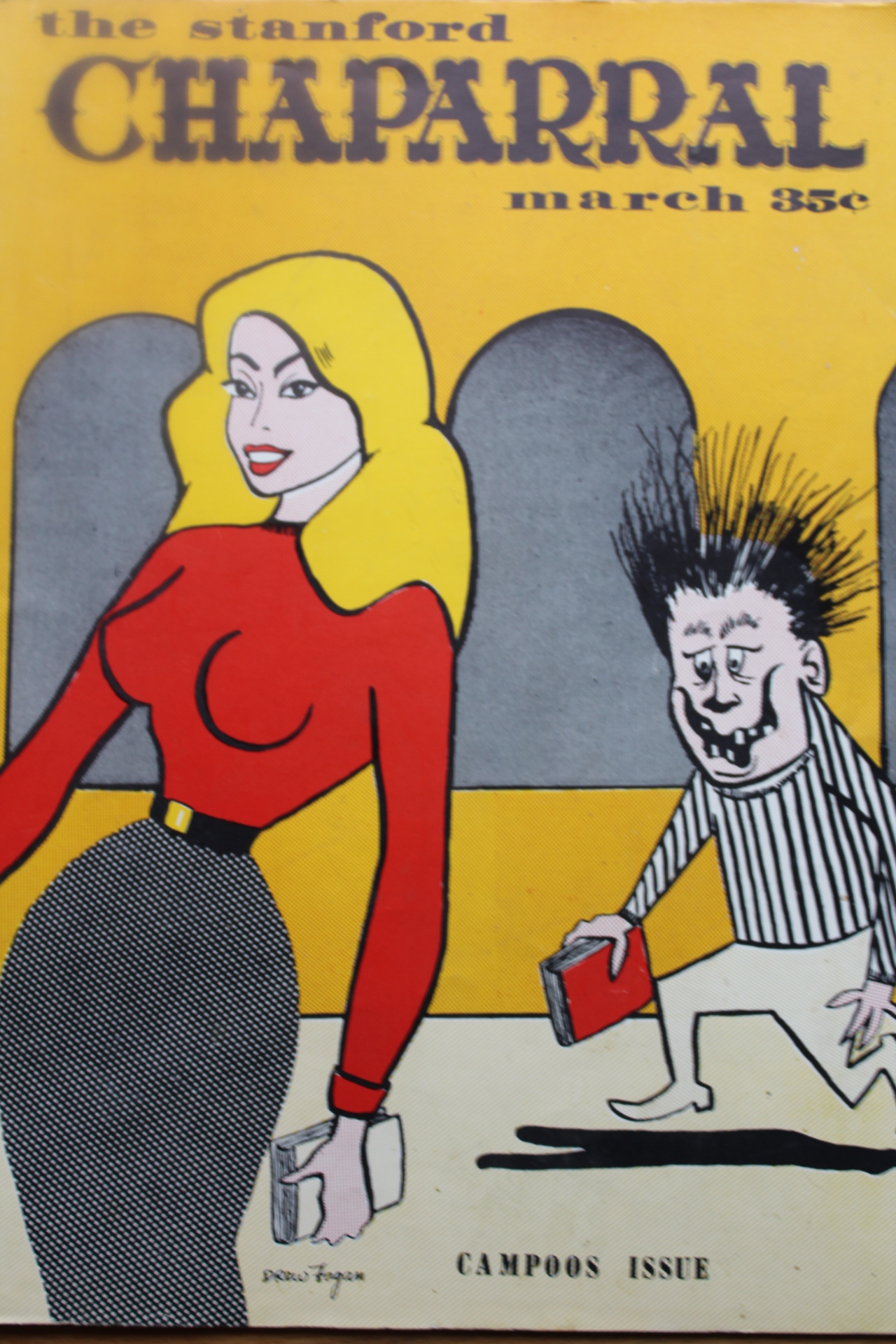 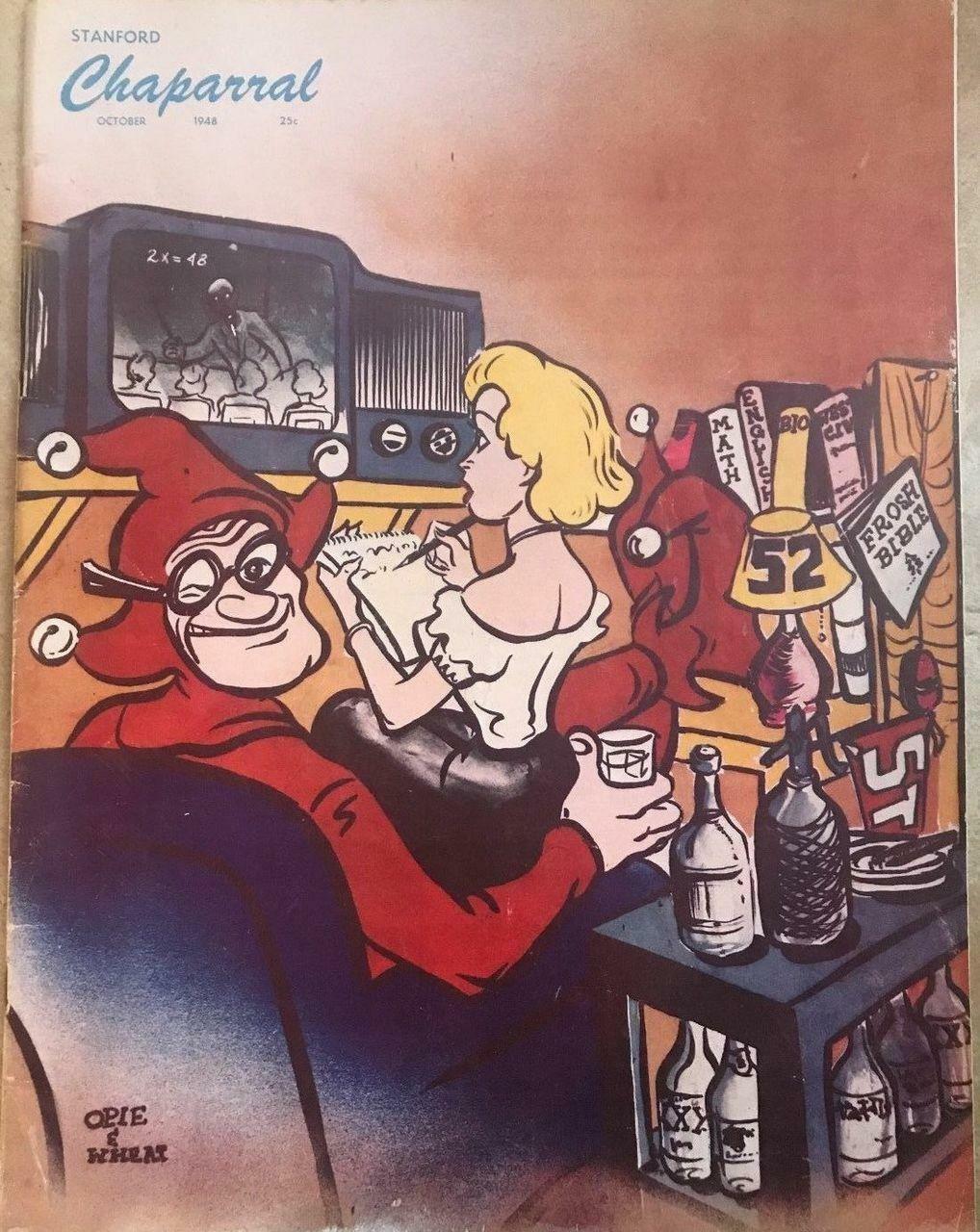 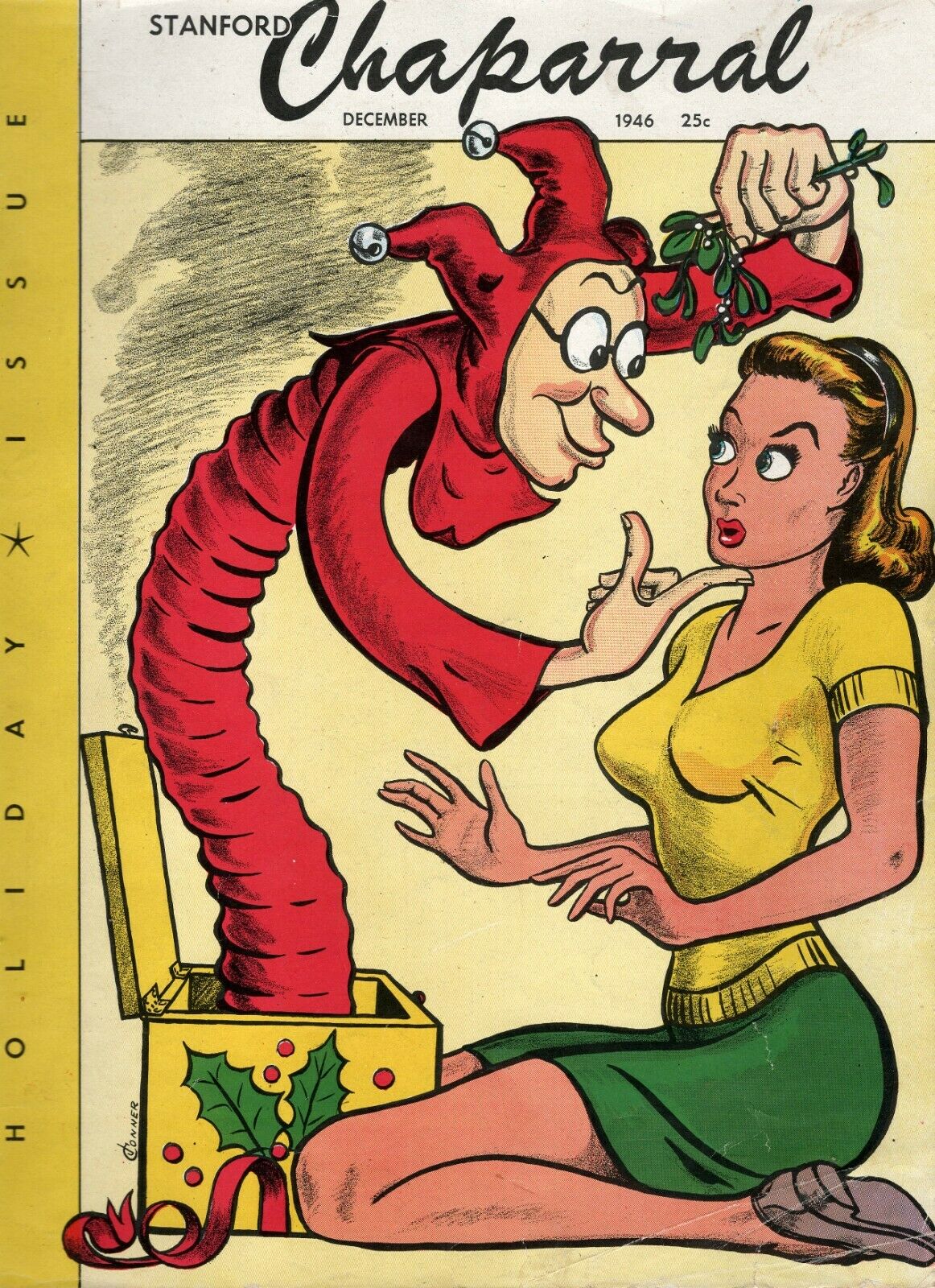 Once each year the Chaparral produces a parody issue modeled on another magazine, including the cover, which mocks the original. The 1961 Chaparral's theme was "Layboy," which apparently was a bridge too far since the magazine's editor Brad Efron was suspended after its publication and the magazine was shut down for the remainder of the year. 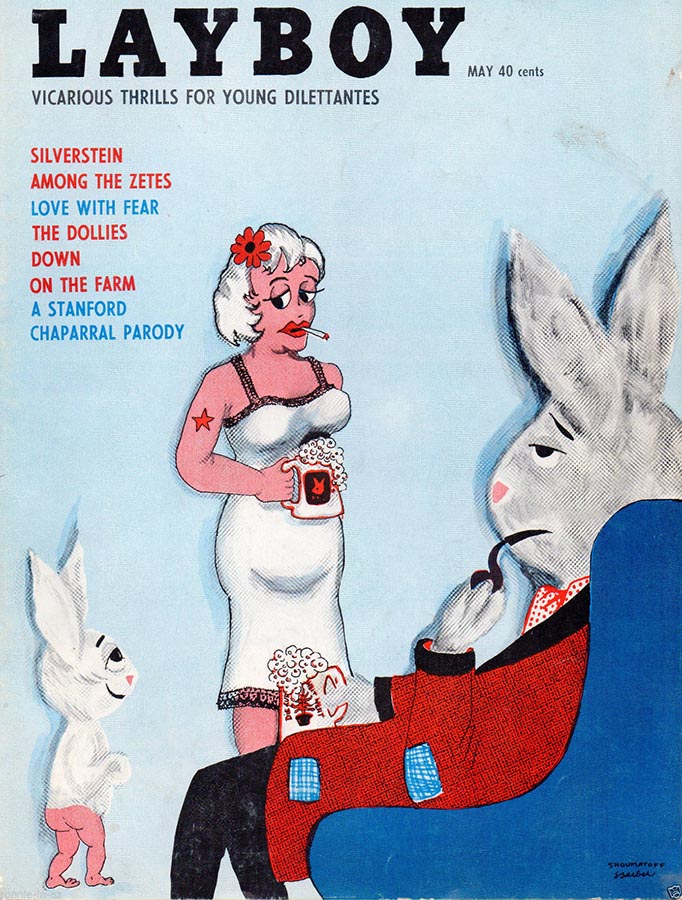 During this era the magazine also named a "Queen of the Month," sometimes featured in a centerfold style, although always clothed. Below is the queen from the March 1959 issue. 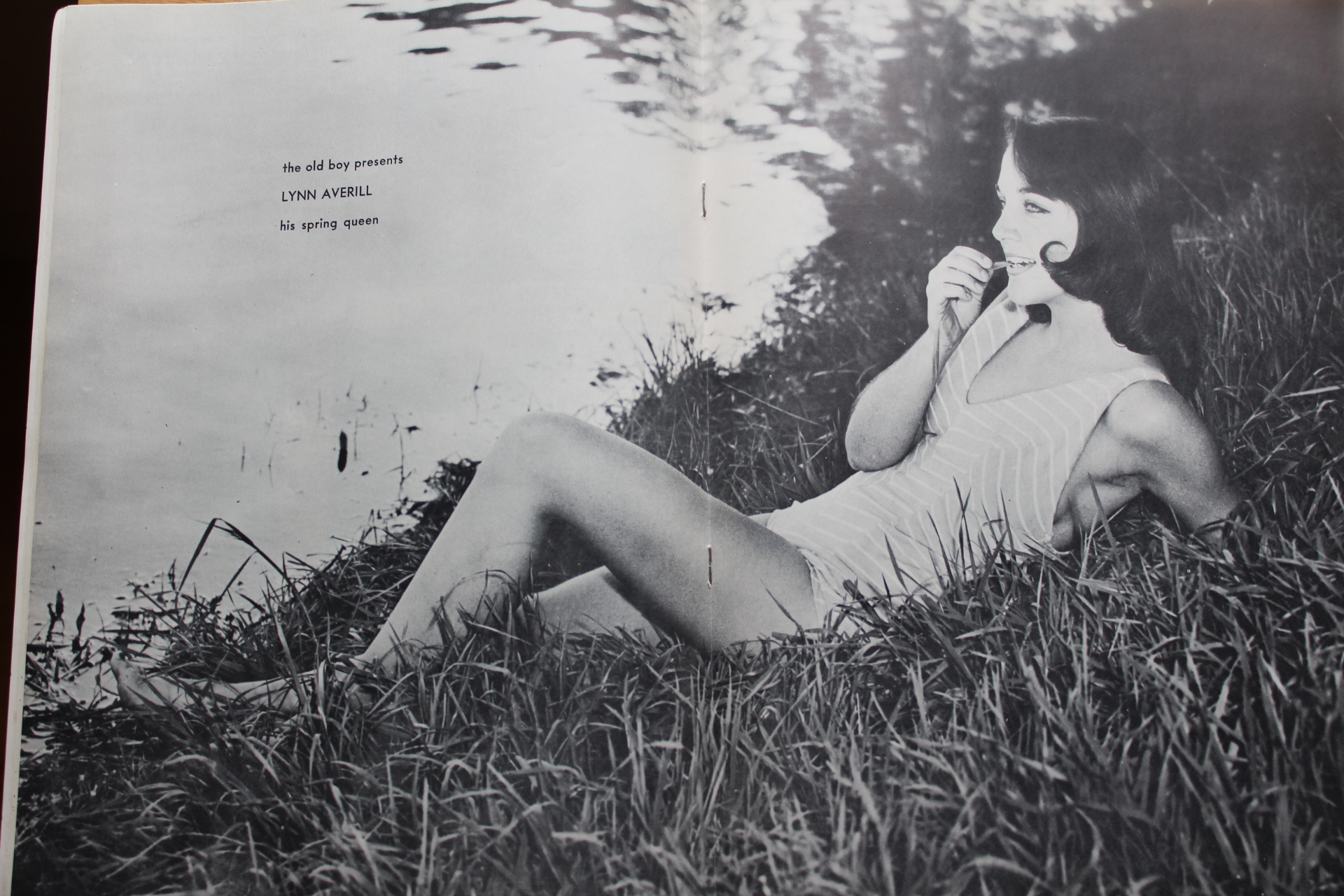 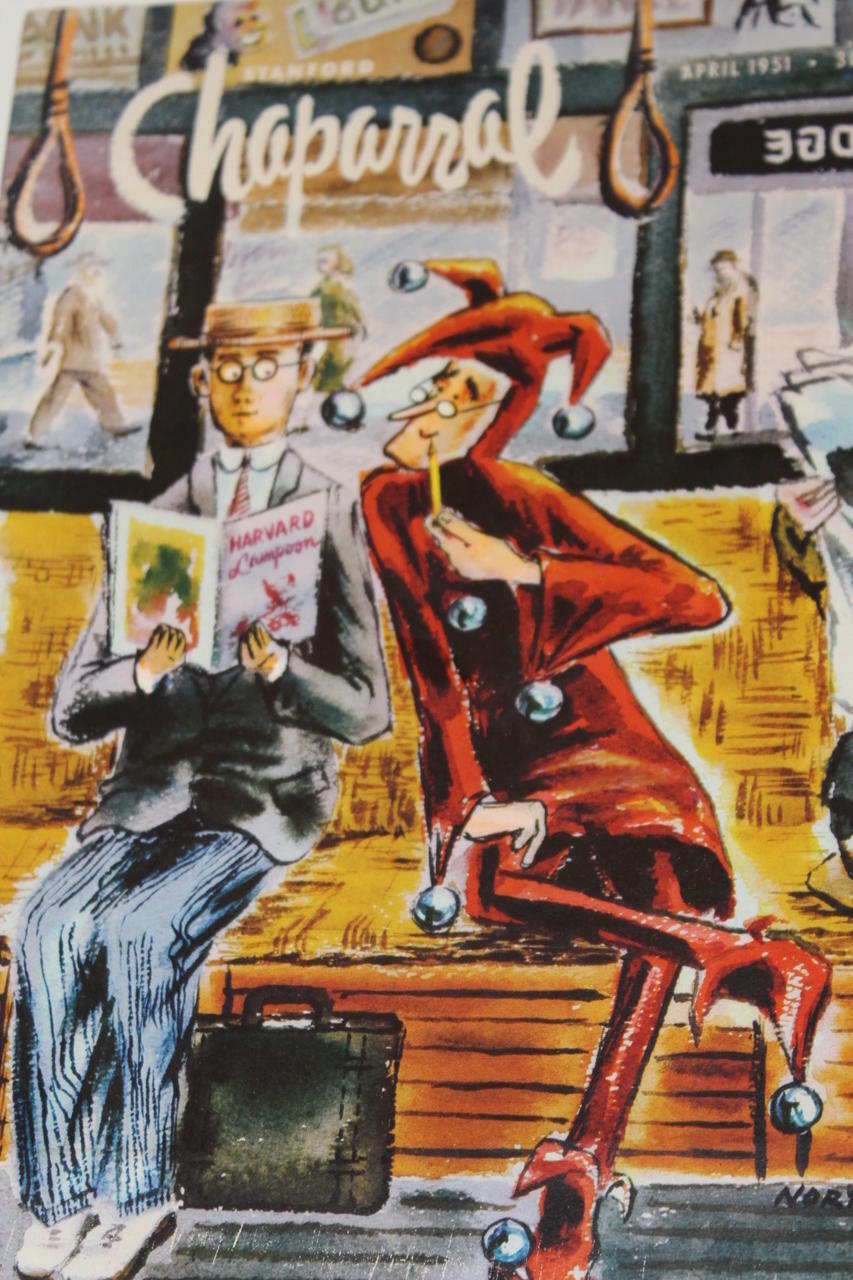 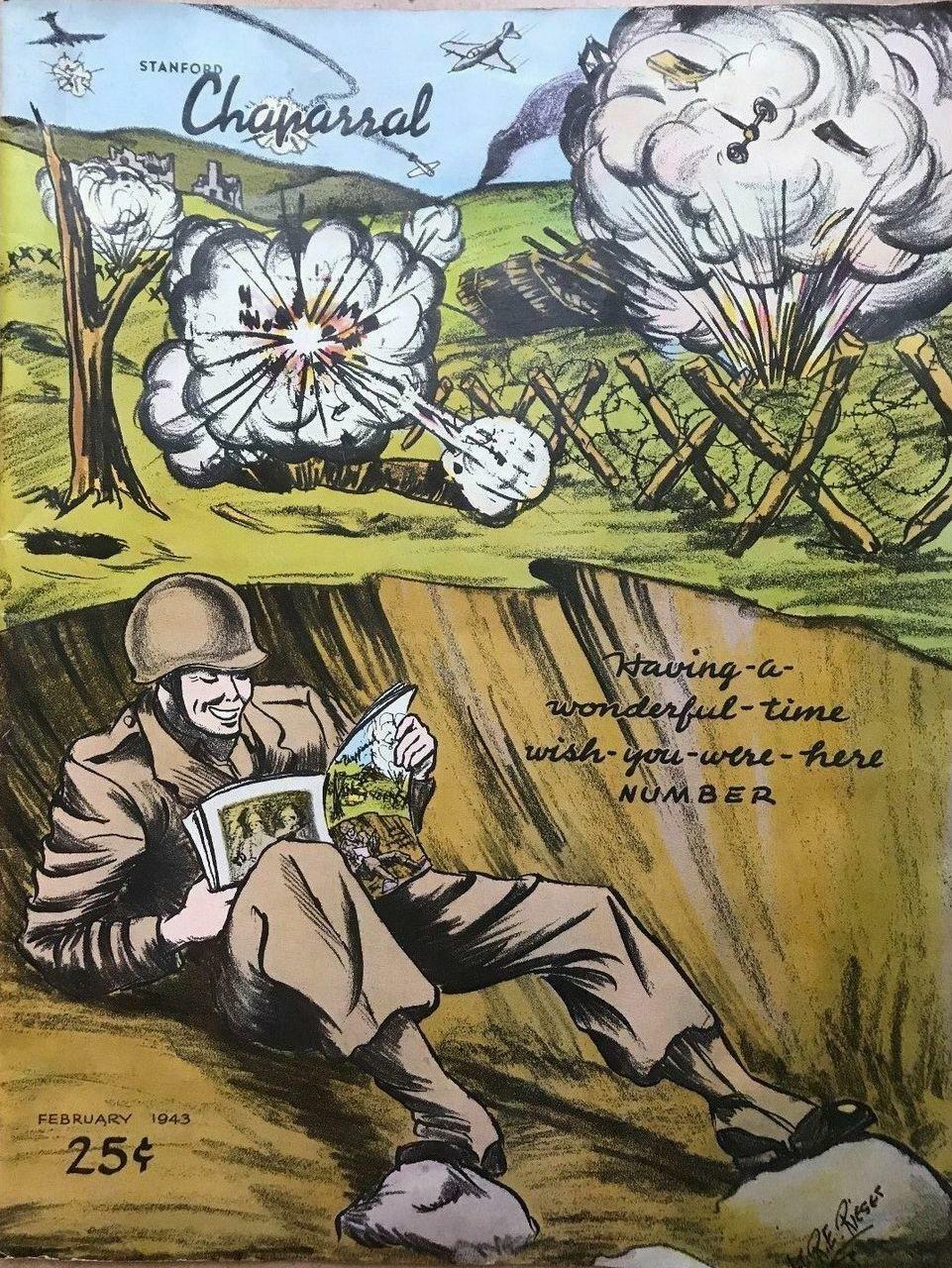 Chaparral magazine from 1943 with a war themed cover

The frequency of the Chaparral has changed over time. At its launch the magazine was published semi-monthly. During the nineteen teens it was published nine times and year and this decreased to a semi-annual frequency during the Second World War.

One of our favorite Chaparral covers is from March 1948 and shows a horse race in the middle of the Stanford campus: 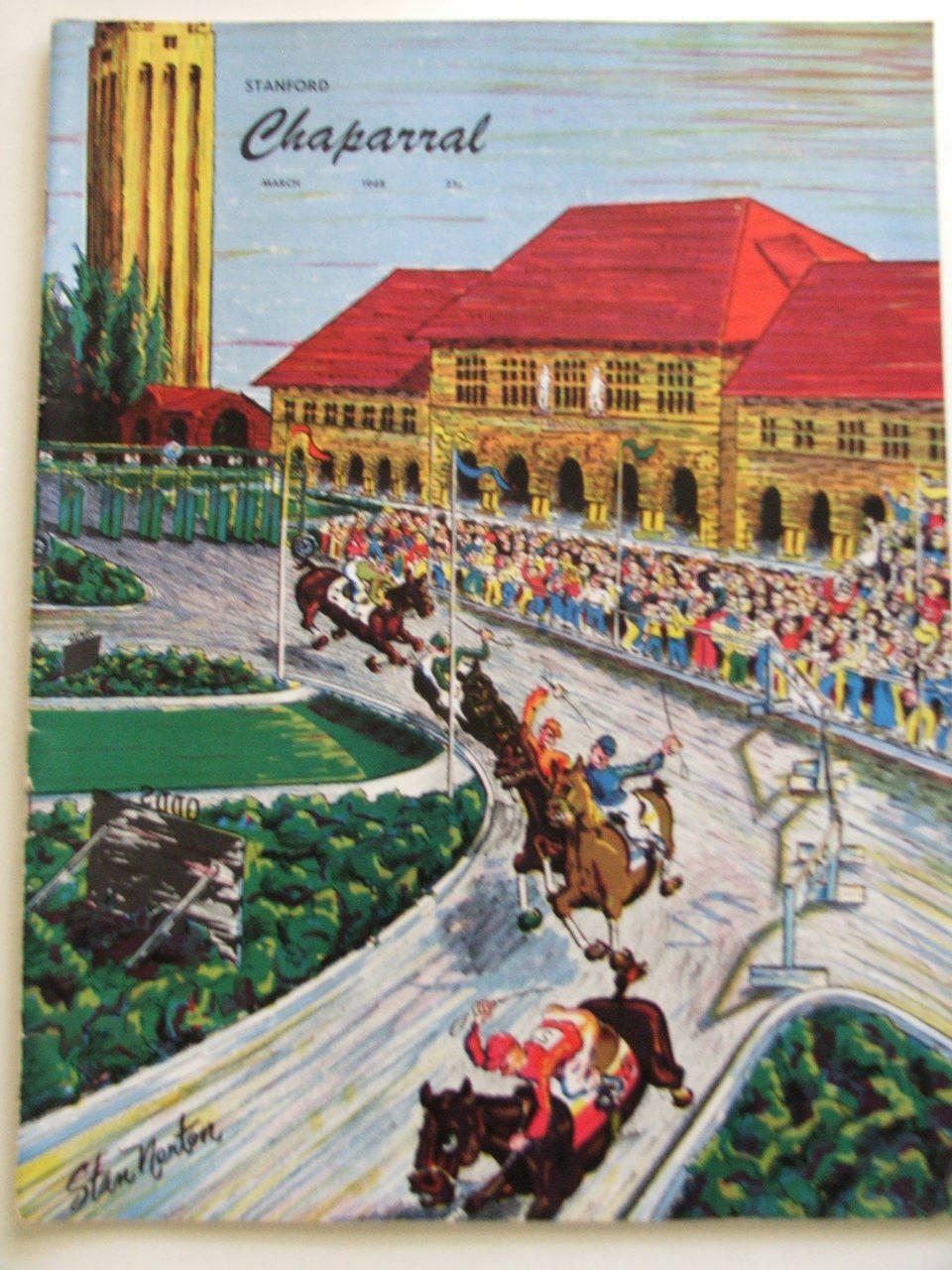 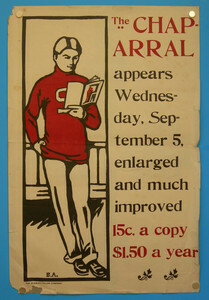 A Bristow Adams designed poster advertising the Chaparral from 1903