We recently obtained a book published in 1895 and it gives a pictorial history of the University of California from 1868 to 1895. At the time the University of California was located only in Berkeley and didn't have campuses spread throughout California, as these would come later. The book is a neat look back at the early history of Cal Berkeley from the late 19th century. They formed a School of Military Science and Tactics in 1886 and it was initially run by Lieutenant George F. E. Harrison. The school also fielded a group of cadets, presumably an early form of an R.O.T.C. program. A nice picture of the cadets on campus in formation being led by a military band is below. 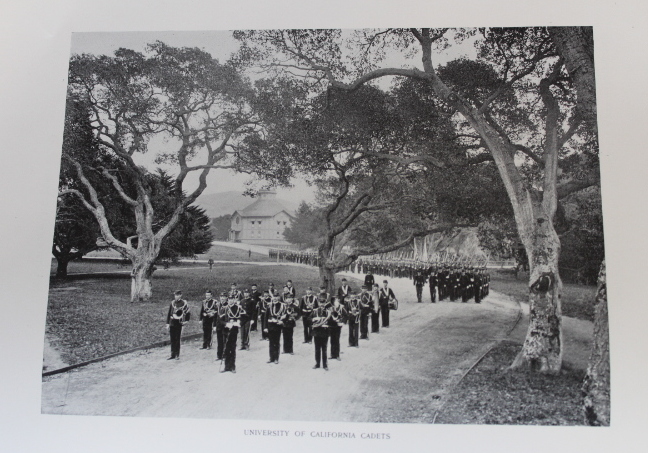 The University was organized into two broad groups of colleges: The Colleges of Liberal Culture and the College of Applied Sciences. The study of Greek and Latin were heavy requirements for the Liberal Culture Colleges, which lead to a Bachelor of Arts degree. The liberal arts courses only take up a minority of the book and the school's curriculum, with far great weight being given to the sciences. 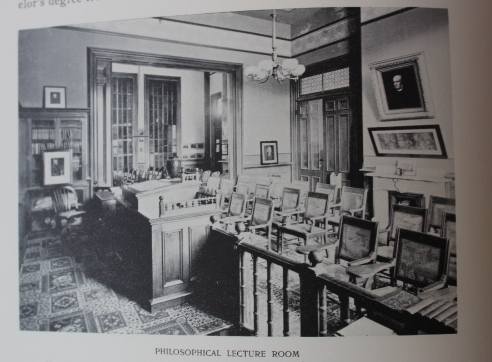 The Philosophical Lecture Room at the University of California, 1895. Berkeley offered a graduate degree Doctor of Philosophy. 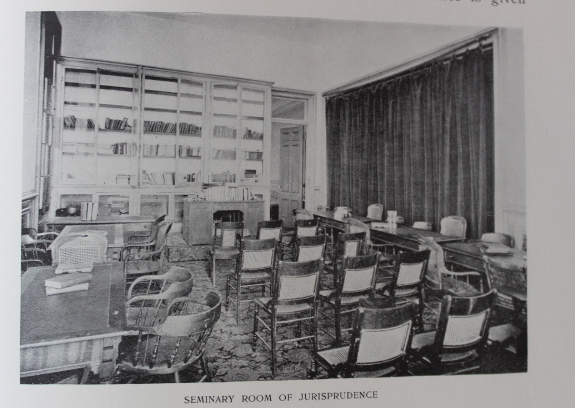 Above is an early picture from the Hastings College of the Law, University of California from 1895. This portion of the school was located in San Francisco. The College opened in the Old Pioneer Hall, San Francisco on August 9, 1878. John Norton Pomeroy, who had been chosen first Professor of Municipal Law, delivered his inaugural address. The latter part of the book lists all 150 students enrolled in the law school. The law school at the University of California in San Francisco was the first in the state. 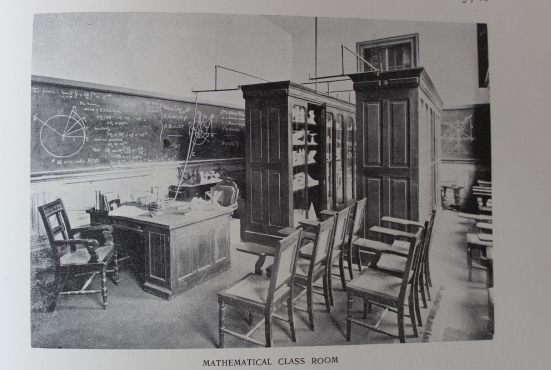 A classroom teaching math at University of California, 1895

Given its location in Northern California and its proximity to the gold and silver mines in California and Nevada, the school had a large School of Mines. "The College of Mines is designed for students who wish to become mining or metallurgical engineers, or to engage in one of the many pursuits connected with the mining industry, such as the surveying and mapping of mines, the assaying and working of ores, the designing of mining machinery, or the exploitation of mines." 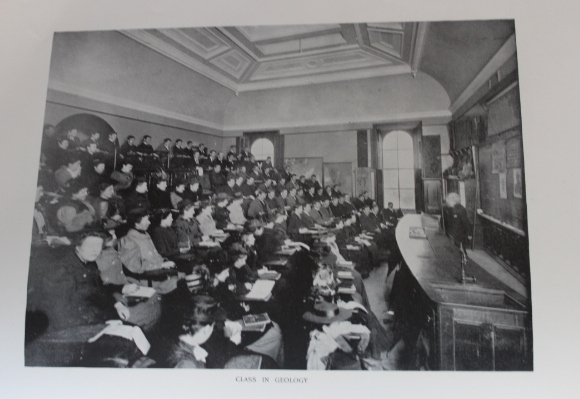 Other early schools with large mining schools included Columbia University and the Colorado School of Mines. The mining school had an elaborate assaying laboratory occupying a suite of six rooms where they could crush and grind samples and they also had a full assortment of miners' pans, horns, bateas, and other devices for making vaning tests of ores. They could do a fire assay of gold, silver, lead, antimony, tin, iron, nickel, cobalt, and quicksilver ores and products. The mining school also had four crucible and three muffle furnaces designed to burn either charcoal or coke as well as two soft-coal muffle and crucible furnaces, on a par with the University of Freiberg in Germany, the University of Vienna in Austria (Przibram) and the Colorado School of Mines. 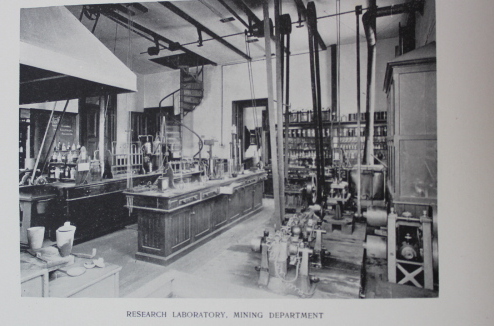 The research lab, picture above, was a suite of four rooms which contained two iron-clad crucible furnaces with an air blast and two iron-clad muffle furnaces, a one horse-power Krom sample crusher, a set of automatic sizing sieves, a small amalgamating pan, a Taylor shaking frame, a Johnson filter press, a set of switchboards, volt and ammeters, connected with a dynamo and battery. Equipped with all the latest cutting edge items, the lab also had an air thermometer, a Fischer calorimeter-pyrometer, and a Siemens electric-pyrometer; also the Orsat, the Bunte, the Fischer apparatus for the analysis of furnace gases, and a Thomson calorimeter for determining the heating effect of fuels. 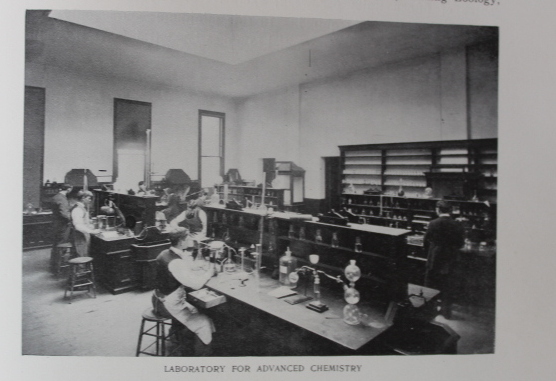 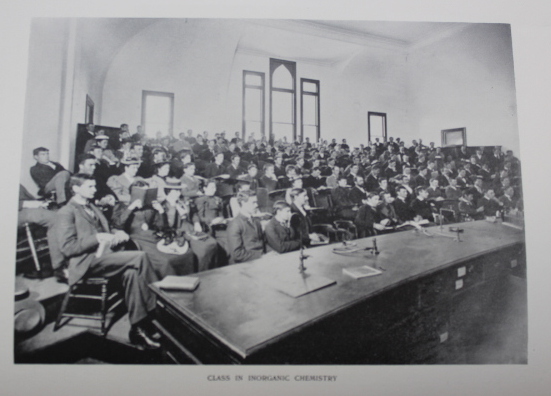 Lecture Hall in Inorganic Chemistry, University of California, 1895. Notice how well dressed the students are with the men wearing formal suits and the ladies wearing long dresses and hats. 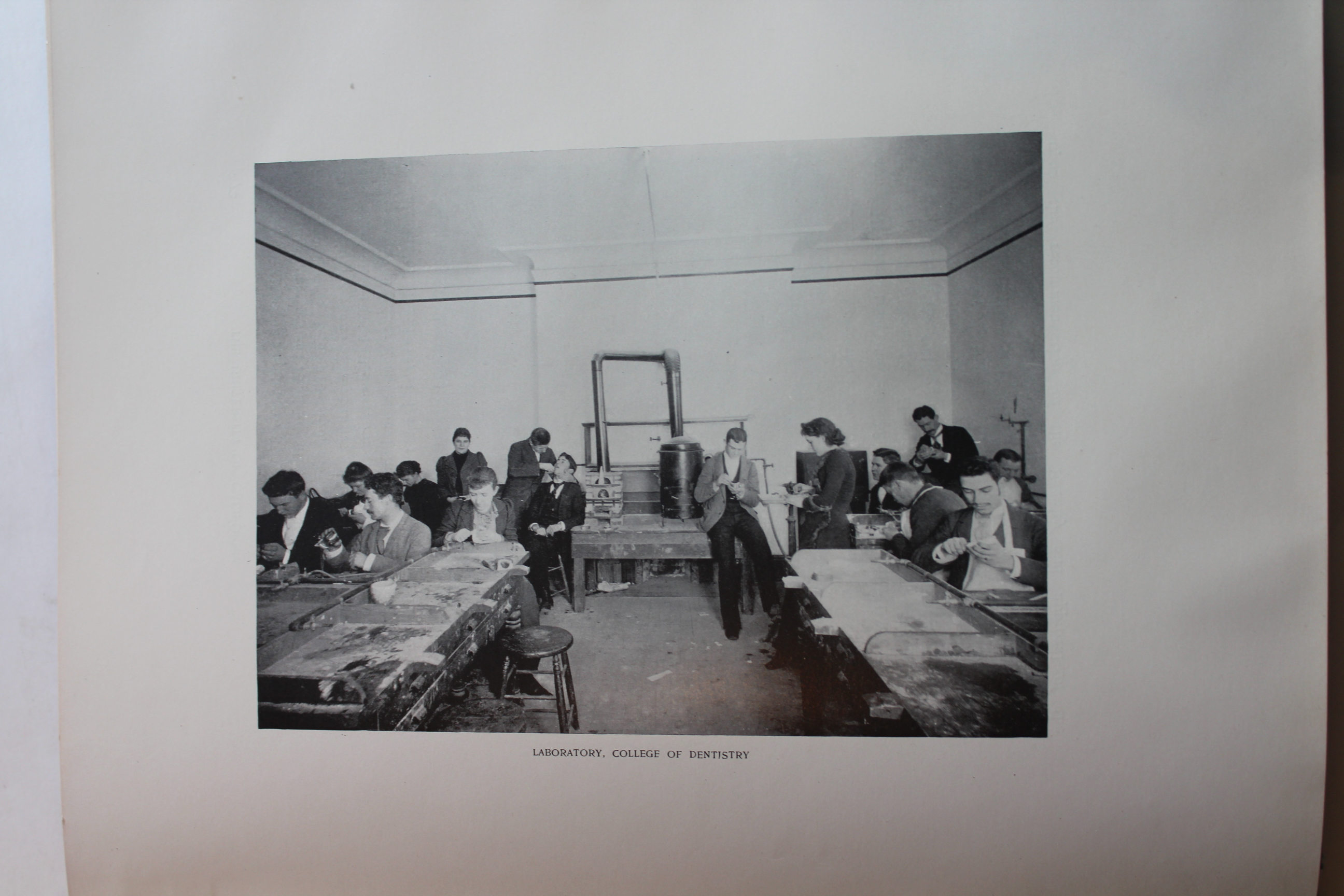 The laboratory, College of Dentistry, University of California, 1895

During its early years Cal Berkeley had a dental school. At the time of the books publication there were 200 students enrolled. It was one of the earliest dental schools in the country, organized in 1881. This was preceded by only six schools: Baltimore (1839), Harvard (1868), Michigan (1874), Penn (1878), Tennessee (1878) and Vanderbilt (1879). Technically, the dental school was in San Francisco and not in Berkeley, originally located in Toland Hall but was eventually moved to the Donohoe Building on the corner of Market and Taylor Streets. 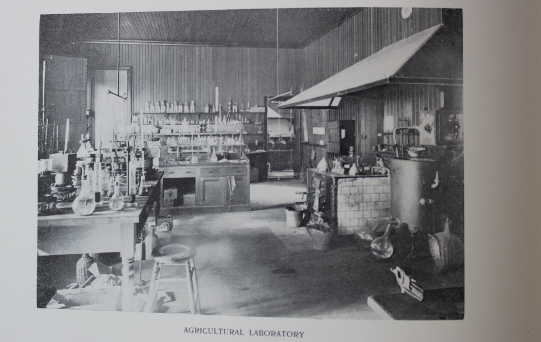 Given California's rich resources in farming and agriculture it is no surprise that the school had a large college dedicated to studying these activities.

The University had a viticulture laboratory, the only one of its kind in the United States where they could engage in the "analysis of musts and wines, but also for the experimental production of wines on a small scale. Wines are here made experimentally, for the purpose of testing the peculiarities of different grape varieties, or differences caused by the various soils and localities. U.C. Davis, formed in 1905, would eventually become the preeminent U.C. school for studying viticulture, but this was a decade off when this book was published. The agriculture school also had an olive testing facility which was used to determine the best olives to use to make olive oil.